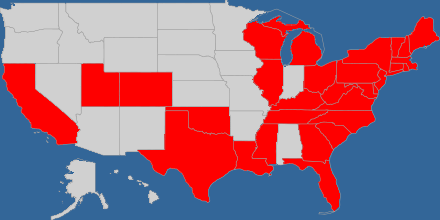 One of the wonderful features about Blogger is that I can write posts and then have them publish on future dates. I was in Chicago from Tuesday through Saturday – more on that not just anon, but for a couple of weeks – and except for about an hour on Friday, when I could check my Gmail and AOL accounts and print my boarding ticket for my return flight, I had no access to the Internet, unless I wanted to spend 47 cents per minute. Note: I did not.

Writing ahead wasn’t all that difficult. What IS hard is getting started again. For me, there’s a blogging rhythm. If I’m posting every day, I’m probably writing at least every other day. When I came back from this trip, though, I needed to spend time with my wife and daughter, check my work e-mail (accessible from home, but not elsewhere remotely – 300 deleted on Sunday), mow the lawn (though I had mowed it Sunday or Monday before I left, the rain during the week, especially the remnants of Tropical Storm Hanna, made it necessary again), church and other tasks precludes blogging. Here’s something: my suitcase probably weighed 15 pounds on the way to the conference; it weighed 41.3 pounds on the way back, so I had to sort through all that conference swag, papers, and whatnot.

But it’s more about the momentum. A blogger in motion tends to stay in motion; a blogger at rest tends to stay at rest. I have PLENTY to write about. (Rose, BTW, has some ideas about what to blog about if you don’t.)

Oh, one thing about Chicago. I tend not to tell people I’m going away until I return. Since I changed my Blogger links, though, that was undermined. I knew in the first case it would be, so when it happened the second time, it was no big deal. Time #1 was when my colleague Amelia wrote: Blogging for Your SBDC – Roger and Amelia go to Chicago back on August 27, the cat was rather out of the bag. Then when Gordon mentions we went to a Cubs game together, well the jig was really up. As I tweeted (that’s what you do on Twitter), someone tweeted about a session I attended in Chicago in real time; I’m still disinclined.

A couple things about the Cubs game: someone from the Astros, Ty Wiggington, hit a two-run homer; he used to be with the Mets . Meanwhile, a Cubs runner was thrown out at the plate; a MOST unpopular call, and at least one Cubs fan in our section was very loud and vocal in his “appreciation” of the ump’s brain functions. But the very worst play: men on first and third for the Astros. Runner on first caught 30 feet from first base and caught in a pickle (rundown). So the runner at third heads for home. Instead of trying to tag the runner heading back to first, the middle infielder throws home, but muffs it. The one runner scores, and the other’s safe at second; Little Leaguers would have done it better. I had the Cubs going to the World series from the beginning of the season – ouch.

I’ve wanted to write about our vacation trip to Williamsburg, VA, but haven’t been able to carve out the time to do it justice. So I’ll just tell you about the state plates we saw. I was particularly curious this trip because I wondered wwhether the price of fuel would dampen the travelers.

We started in Albany on a Saturday, to NJ to south central PA, where we stopped overnight to see Carol’s brother, his wife and their daughter. Then the next day did the rest of the trip through MD to VA. Thursday, we returned to the brother-in-law’s abode, then back home.

On each leg of the trip (south and north), we managed to see all the states and places (like DC) from ME to FL, plus three Canadian provinces: Ontario, Quebec and Nova Scotia. We also spied, both ways, OH, MI, WI, KY, TN, AL, TX, OR, CA, and plates for US Government. We caught OK both ways, but they were trucks in both cases. We saw cars from AK (ALASKA!) and MN on the way down, and a truck from those states – and I mean one truck, with one plate on the cab and another on the trailer, on the return trip. There was a MS truck on the return trip.

But I was most excited to see, on the way down, a HI car! Someone transported a car from Hawai’i to, presumably, California, and has been driving around the country, I’d guess.

The states I didn’t see at all were primarily in the mountain region: WA, ID, MT, CO, WY, UT, AZ, NM, NV, ND, SD. I was surprised not to see Colorado, which I usually catch every trip, and slightly surprised not to see the southwest states. I’m now thinking that finding a Wyoming plate on an East Coast trip is the gold standard.

I must say that it’s getting harder to identify some plates when you’re going 55 or 65 MPH. There are so many variations. The site here addresses some of them.

But I saw this plate

and initially thought it was from AZ or NM.

This variation, not so much:

Anyway, the first day back to work, in downtown Albany, what do I see? Something I didn’t see in almost 1300 miles of traveling: a Colorado license plate.

So what am I most anticipating in the new year?
READING
For the first time in decades, THREE comic-related items:
The Steve Ditko book.
The Jack Kirby book
The Fred Hembeck book. BTW, happy five years of blogging, Fred!

WATCHING
More movies; likely next chance, MLK Day. Likely film: Juno.
Pioneers of Television which starts TONIGHT on PBS with sitcoms (I Love Lucy; Joyce Randolph on The Honeymooners; Marlo Thomas about her father Danny’s Make Room for Daddy’ the man himself on The Andy Griffith Show; and DVD and MTM on The Dick Van Dyke Show.
Football. Seriously, taping it then watching it later is SO much more efficient. Definitely some of the NFL games. Probably a bowl game or two.
The Golden Globes, just to see who actually shows up and say they support the Writers’ Strike, even as they’ll be others who’ll boycott the show altogether for the same reason.

HEARING
The new music I got in the last month, including the John Lennon Anthology. There’s more, but I’ll save it for my Top 10 album list.

VISITING
Williamsburg, VA with the family. My in-laws have as timeshare.
Visiting the BNorman Rockwell Museum, not all that far from here in Stockbridge, MA. My wife wants to see the Rockwell stuff. I really want to see LitGraphic: The World of the Graphic Novel (through May 26, 2008), featuring Jessica Abel, Sue Coe, R. Crumb, Howard Cruse, Steve Ditko, Will Eisner, Brian Fies, Gerhard, Milt Gross, Marc Hempel, Niko Henrichon, Mark Kalesniko, Peter Kuper, Harvey Kurtzman, Matt Madden, Frans Masereel, Frank Miller, Terry Moore, Dave Sim, Art Spiegelman, Lynd Ward, Lauren Weinstein, Mark Wheatley, Barron Storey and others.
Seeing my friends Gerelt-Od and Soyol who used to live in Albany then returned home to Mongolia, but who’ve been in NYC the past year; I haven’t seen them in nearly a decade.
Seeing my friend Deborah, who I met in 1977 in NYC, who moved to Japan and then France, and who’ll be visiting the Western Hemisphere at some point this year. I haven’t seen her in over a quarter century.

That’s as close to New Year’s resolutions as I go.