The Supremes, of course, were THE #1 female group in the Unites States. You can argue for Destiny’s Child or someone else, but by the calculations of the Joel Whitburn book reflecting the Billboard singles charts through 2002, they were #25, behind Madonna (#4), Janet Jackson (#9), Aretha Franklin (#10), and Mariah Carey (#14) among female artists; Destiny’s Child was #181. On the Billboard album charts through 2006, they were #29, behind only Babs (#5) and Aretha (#18); Destiny’s Child was #451. (The Whitburn books balances off the fact that there are more people today than 40 years ago, and gives points to longevity.)

But it wasn’t always the case. They were known as the “no-hit Supremes” when they came out with Meet the Supremes, which didn’t enhance their commercial reputation. This was in a period (1962) that the others besides Diana Ross actually sang leads. The late Florence Ballard sings on my favorite song on the album, the energetic pop of “Buttered Popcorn”, while Mary Wilson is featured on the soul ballad “Baby Don’t Go”, written by Berry Gordy. There were actually two album covers. My original album cover was the “soft focus” one, which was actually the second version, done in 1965, after they made it big. The “chairs” cover was the first cover, which was still being used when I repurchased the album subsequent to the Great Album Theft of 1972. You can’t even find this album on Amazon, except at an outrageous price from individuals. Too bad, because it’s a charming collection, showing a lot of promise for what was to come.

That theft wiped out a lot of albums I never replaced, notably the “theme” albums: A Little Bit of Liverpool (featuring a terrible version of A Hard Day’s Night); The Supremes Sing Country, Western, and Pop; and We Remember Sam Cooke, all coming out after the breakthrough album Where Did Our Love Go, and before More Hits by the Supremes. 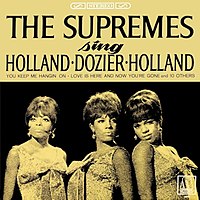 After a couple specialty discs and the more popular fare of I Hear A Symphony and Supremes A’ Go Go, the group came out with what I thought was a peculiarly named 1967 album: The Supremes Sing Holland-Dozier-Holland, odd because most of their pop fare was already written by Brian, Lamont and Eddie, and produced by the former two. As was often the case at Motown at that time, the album featured songs previously recorded by other Motown artists such as the Four Tops (“I’ll Turn to Stone”, “It’s the Same Old Song”) and Martha and the Vandellas (“Love is Like a) Heat Wave”), which, while not matching the originals, were enjoyable. Of course, it had the hits (“You Keep Me Hangin’ On”, “Love is Here and Now You’re Gone”), but my favorite song is a tune I always thought my sister or my eldest niece, singers both, ought to try, “Remove This Doubt”, complete with strings. Elvis Costello did this song on Kojak Variety, which is not bad, but pales to the original, to my ears.

1967 was a real transitional year. Florence Ballard left the group after the Rogers and Hart album, replaced by Cindy Birdsong of Patti LaBelle and the Bluebelles. Also, Holland-Dozier-Holland left Motown over a dispute with Berry Gordy. The group, now Diana Ross and the Supremes, did one pop album, Reflections, a really transitional album with the last H-D-H pieces (and the last Flo Ballard work), and too many uninspired covers (Ode to Billie Joe?). Then they did three specialty albums, including one with the Temptations, before releasing Love Child.

Love Child is the last very good Supremes album, as opposed to a couple singles and a bunch of filler. The first side is more soulful, the second, more pop. The group and the producers seem reinvigorated here, but the subsequent albums were far inferior to this one.

Love Child (Henry Cosby, Frank Wilson, Pam Sawyer, Deke Richards, R. Dean Taylor) -yes, the R. Dean Taylor of “Indiana Wants Me” fame. Motown session singers The Andantes sing the backup vocals on this song.
Keep an Eye (Nickolas Ashford, Valerie Simpson)- a great song of warranted paranoia; “There used to be three of us seen all over town. Now there’s only two. Someone’s missing. Guess who?”
How Long Has That Evening Train Been Gone (Sawyer, Wilson) – an Amazon critic says: “a late 60’s soul masterpiece, features a killer (and much studied) James Jamerson bass line, and lyrically, tells a compelling story.”
Does Your Mama Know About Me (Tom Baird, Tommy Chong) – a cover of the Bobby Taylor & the Vancouvers song about interracial love. Yes, that’s the Tommy Chong of Cheech and Chong on the songwriting credits.
Honey Bee (Keep on Stinging Me) (Janie Bradford, Debbie Dean, Richards) – straight ahead infectious pop. My favorite song because of the bass and background vocals
Some Things You Never Get Used To (Ashford, Simpson) The first single, which only went to #30, oddly. The Andantes sing backup here.
He’s My Sunny Boy (Smokey Robinson)- the horns punch up this tune.
You’ve Been So Wonderful to Me (Anna Gordy Gaye, George Gordy, Allen Story) – lilting pop.
(Don’t Break These) Chains of Love (George Beauchamp, Harvey Fuqua, Johnny Bristol) – more towards the MOR Motown was aiming Diana towards.
You Ain’t Livin’ Till You’re Lovin ‘ (Ashford, Simpson) – a cover of Marvin Gaye & Tammi Terrell’s original that I was not familiar with at the time.
I’ll Set You Free (Gwen Fuqua, B. Gordy, Ivy Jo Hunter, Renee Tener) – my favorite song from Side 2, with the classic Supremes background vocals.
Can’t Shake It Loose (Sidney Barnes, George Clinton, Joanne Jackson, Rose Marie McCoy) Yes, THAT George Clinton, and I don’t mean the former governor of New York.
***
Greg Burgas sent me a mixed disc featuring Dr. Goldfoot And The Bikini Machine, the title track of an apparently not very good 1965 movie. And though I own FOUR Supremes collections (two on vinyl, two on CD), I never owned this song, which is on The Supremes Box Set (2000). Thanks., Greg!