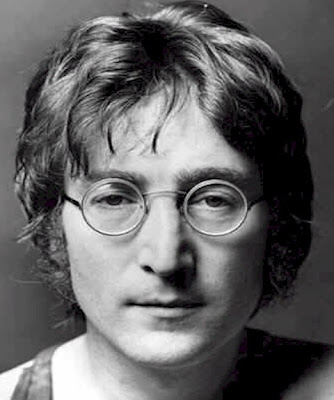 Today is the anniversary of the death of John Lennon. I realize that, while I always mark his birth (October 9, 1940), I don’t always note his death (December 8, 1980), not just because the death was so tragic and senseless, but because I’d been operating on the assumption that it was somehow disrespectful to focus on death. One should focus on life! Though I do remember calling my friend since kindergarten Karen at 2 a.m. that night Also working at FantaCo the Sunday after, we closed the store for ten minutes in the middle of the afternoon for a time of silence, with some of the customers still inside (at their request).

Then I pondered: am I’m being unrealistic? Public figures, especially, come into one’s life generally after one is born. I remember November 22, 1963 but do I even KNOW John F. Kennedy’s birthday. Well, yes, it’s May 29, 1917, but only because I once blogged about it. (Aren’t blogs educational?)

Likewise, I’m convinced that the push for a Martin Luther King holiday was born, in part, by people who didn’t want April 4, 1968 to be his legacy but January 15, 1929, a/k/a the third Monday in January.

So, I suppose, instead of overthinking this, I should, in the words of one of Mr. Lennon’s colleagues, “let it be.”

Odetta died last week. I have a grand double album of her music on something you kids may not recall, vinyl. This was one of my father’s true musical heroes, and her passing, in some way, makes his passing eight years ago, more real.
LINK

Forry Ackerman, who died a few days ago, was a huge part of my life at FantaCo, for we sold oodles of copies of the magazine he founded, Famous Monsters of Filmland. The earlier issues were classics, but the latter ones, most of which came out after he’d left the publication, were often reprints of previously published material.

It was so significant a publication to publisher Tom Skulan that three years after I left, FantaCo published the Famous Monsters Chronicles. Though a book rather than a magazine, Tom always considered it the last of the Chronicles series that started with the X-Men Chronicles a decade earlier. It’s out of print and apparently in demand based on the Mile High price listing.

I went to see the AIDS quilt last Wednesday. Not so incidentally, the program was cut from five days to four because of budget cuts. For the last three years, I had requested that the section featuring my old friend Vito Mastrogiovanni come to Albany. This year, it made it. There it was, a much more simple design than some of the others. There it was.

Seeing it, I thought I’d get emotional, but I did not. There it is. Until I started talking to one of the guides, a task I had done in previous years, talking about how we were in high school together, how we tried to end the Viet Nam war together, how we partied together. There it is. And then I did get just a little verklempt. There it is – Vito Mastrogiovanni 1951-1991. May 15, 1991, same good friend Karen, who was his best friend, noted when I called her that evening.

I wrote here three years ago about my late friend from my high school days, Vito Mastrogiovanni, who is commemorated on an AIDS quilt.

Also in Vito’s class was a very intelligent guy named Stuart. Generally, I admire intelligence. In this case though, Stuart knew he was smart, and it made him arrogant, obnoxious. I did not like this person. At all.

At this 20th reunion event, one which Vito boycotted, probably in part out of the rage he was feeling about having AIDS, Stu was there. I recognized Stuart but made no attempt at talking to him. Interestingly, Stuart made overtures to talk to me. He was – shockingly – pleasant and polite. He apologized to me for being such a prig. He said he learned a lot about himself over the years. He also revealed to me that he had AIDS.

I have no precise idea why Stu told me this, why he singled me out; he was a tool to just about everyone, I thought. Or maybe he was telling lots of people, but one at a time; I suppose a mass announcement from the microphone may not have gone well.

Unlike Vito, who made some peace with his disease before he died in July 1991, I have no idea whatever happened to Stu. His name does not appear in the 2003 school alumni directory, but that’s hardly definitive. His last name is so common that there was a guy when I went to college with exactly the same name; much nicer dude, BTW. But I am pleased he took the time to reach out to me, for whatever reason.

I have worked this event a few times in the past. I won’t have a chance this year, but I always make an effort to attend it, if only to see if Vito’s quilt has made it to Albany.