I also puzzled over the Major League baseball team, the Cleveland Indians, less over the name, and more over what I consider the bizarre caricature of Chief Wahoo.

It’s football season in America – I mean, using the ball to the left, NOT the ball to the right.
When I was growing up, my father and I would watch, on our local CBS-TV affiliate, all the games of the New York Giants of the National Football League, who actually played in New York, not New Jersey, at the time. Their main rivals were, and are, the Philadelphia Eagles, the (hated) Dallas Cowboys, and the Washington Redskins. Even then, I found the nickname of the Washington team peculiar. Most teams were named for animals – Lions (Detroit NFL) and Tigers (Detroit baseball) and Bears (Chicago NFL), e.g. The ones that were named for people tended to be about geography (New York Yankees-baseball) or occupations (Pittsburgh’s baseball Pirates and NFL Steelers). “Redskins” seemed somehow unseemly, and this was long before I’d ever heard the pejorative term “politically correct.”

So, I was a little surprised to read here and elsewhere that the team’s owner had meant it as an honorific. This writer talks about the term’s historical usage, going back to the writings of American novelist James Fenimore Cooper, whose “use of redskin as a Native American in-group term was entirely authentic, reflecting both the accurate perception of the Indian self-image and the evolving respect among whites for the Indians’ distinct cultural perspective, whatever its prospects. The descent of this word into obloquy is a phenomenon of more recent times.” 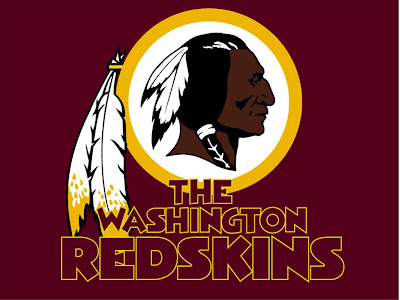 Nevertheless, for some time, it has been the source of controversy, as American Indian Sports Team Mascots notes. In fact, only last year, the US Supreme Court ruled that the Washington Redskins can keep the team name. “Seven native Americans had sued to force the Washington Redskins to change the team name,” but the Court “let stand a ruling that their challenge came too late.” still, this article explains the issue well.

I also puzzled over the Major League baseball team, the Cleveland Indians, less over the name, and more over what I consider the bizarre caricature of Chief Wahoo. Here’s an article about the Indians’ mascot.

I suppose the Atlanta Braves baseball team name bugs me less than the incessant use of the tomahawk chop, more obnoxious when I heard it in Fulton County Stadium in 1995 than the video suggests.

And what of the Fighting Irish of Notre Dame? This does not seem to be an issue. Then again, everyone’s Irish in America, especially in March.