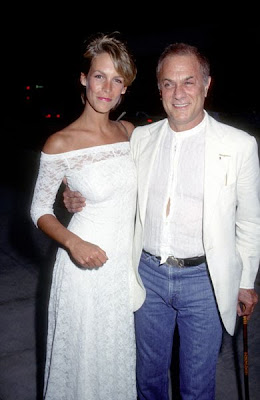 I’m not sure that most people can fully understand cultural phenomena that take place before they were born, or aware of the outside world. A person born after 1968 could appreciate the Beatles’ music, but could he or she understand Beatlemania?

Well, that’s how I am about the actor James Dean, who died 55 years ago today, not to be confused with Jimmy Dean, the sausage guy who died recently. I recognize him as a cultural icon, though he was in only three major movies, two of which were released posthumously. I understand it intellectually, but I didn’t “get” it.

CBS News has done at least two stories about Dean; here’s just a snippet of one, James Dean’s cousin Marcus Winslow takes Steve Kroft on a tour of Dean’s museum and his final resting place.

Here’s the song Message From James Dean by Bill Hayes.

It’s clear, though, that Bob Dylan “got” it, and that Don McLean understood that Dylan “got” it. In this FAQ about McLean’s American Pie, referring to the line, “In a coat he borrowed from James Dean”:

In the movie “Rebel Without a Cause”, James Dean has a red windbreaker that holds symbolic meaning throughout the film… In one particularly intense scene, Dean lends his coat to a guy who is shot and killed; Dean’s father arrives, sees the coat on the dead man, thinks it’s Dean, and loses it. On the cover of “The Freewheelin’ Bob Dylan”, Dylan is wearing just such as red windbreaker and is posed in a street scene similar to one shown in a well-known picture of James Dean. Bob Dylan played a command performance for the Queen and Prince Consort of England. He was not properly attired, so perhaps this is a reference to his apparel…
James Dean’s red windbreaker is important throughout the film, not just at the end. When he put it on, it meant that it was time to face the world, time to do what he thought had to be done, and other melodramatic but thoroughly enjoyable stuff like that. The week after the movie came out, virtually every clothing store in the U.S. was sold out of red windbreakers. Remember that Dean’s impact was similar to Dylan’s: both were a symbol for the youth of their time, a reminder that they had something to say and demanded to be listened to.

But maybe I began to understand better when I read what Wendy wrote about first seeing Rebel Without A Cause:
Here was a character who felt unloved and unseen by his parents just like me. He was also an outcast at his high-school which I completely understood. What I didn’t understand though was how could anyone not fall in love with a character like “Jim”. That was the first time that James Dean touched me with his magic.

As I watched the movie further, I realized that Jim represented all the loneliness, angst, and anger that teenagers either flaunt or hide. He was the antithesis of the shiny smile-y, white-bread teenager that was hailed in the 1950s. Jim didn’t care about how he appeared and couldn’t hide the pain that he wore like a cloak.

THAT, I GET.
***
Eddie Fisher died last week. I don’t remember his singing career at all – and I knew singers of his era – and all that leaving Debbie Reynolds for Liz Taylor stuff was before my recollecting, too. Mostly, for me, he was Carrie Fisher’s dad.