The Daughter now LOVES the Muppet version of Lydia the Tattooed Lady.

I was having an e-mail chat with Jaquandor; either he was correcting one of my typos or I was fixing one of his. That’s what we bloggers do.

He asked: “Hey, have you ever played the song ‘Lydia the Tattooed Lady’ for your daughter? The Muppets did a great version. But then, the Muppets are always great.” I had, but she seemed unaffected by it. It WAS possibly a couple of years ago.

Jaquandor: “And for future reference, here’s Kermit and Lydia! So I played it for The Daughter and The Wife, and also the Marx Brothers original from the movie At The Circus.

Those of you who have been around a while may remember the rules I had for naming The Daughter. So I was initially annoyed that the very first comment from one friend after announcing her name was a reference to this song. I have long gotten past that.

The Daughter now LOVES the Muppet version! She’s probably seen it thrice a week for the last couple months. While my wife and I like it too, we prefer the original, with those extra verses. (I especially like the table dancing.)

Here’s a Rudy Vallee recording from 1939.

I was putting together my monthly list of links, when it struck me that some of the pieces were of a type. They were all about information of one form or another and how sometimes, it goes away.

JEOPARDY! wiz Ken Jennings – he won 74 games in a row – gave a TEDx talk at Seattle University in February 2013 called The Obsolete Know-It-All. It runs about 18 minutes, in which he discusses the JEOPARDY! competition with Brad Rutter (human) and the IBM computer named Watson, as. He talks, among other things, about how a part of the brain shrinks when one uses GPS, or uses the cellphone to look up your friends’ numbers. This is one of those issues I respond to viscerally. Looking it up on Google may be more “efficient,” but it doesn’t compare with knowing stuff.

If the technologies fail us – power grid crashes, computers compromised by cyberattacks – what will we still know? What does it all mean in terms of our human interaction? By contrast, 5 ways robots can improve accuracy, journalism quality.

Andy Marx writes about the day he and his grandfather Groucho saved the television show ‘You Bet Your Life’ from ending up in a Dumpster. If he hadn’t answered the phone, the shows would have been lost forever. In the comments, there was an interesting link to a story of how much of our cultural history depends on one person’s decision to preserve something instead of throwing it away.

Speaking of TV, Ken Levine’s comment about the late Bonnie Franklin, and her TV show ONE DAY AT A TIME falling between the cracks prompted the question about why some shows remain perennially popular while others fade out. “It doesn’t necessarily seem to be question of quality.” Interesting responses in the comments section.

Mark Twain Captured on Film by Thomas Edison in 1909. It’s the only known footage of the author.

Finally, since Jaquandor inspired this with his lazy linkage, I appreciated reading what he has to say: When going back to edit your writing, how do you determine what to keep and what to weed out? I imagine novelists in particular whether to exorcise a scene, or just save it for another book.
***
My first thoughts about the end of this year’s Boston Marathon. Probably not my last. 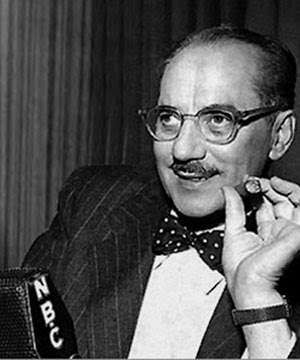 As I certainly have mentioned, I was in a car accident in June of 1972 in Endicott, NY, near Binghamton. I was in a stopped car at a red light and was getting out of the vehicle when another car rammed into the car I was halfway out of. This car was pushed forward into the car in front of it, but it being heavier, knocked me back. I was unconscious and got taken in an ambulance to the local hospital, where I stayed for 36 hours or so. But my recovery took the bulk of the summer.

4. “Humor is reason gone mad.”
How would you describe your sense of humor?

I wouldn’t, but the meme has forced me to. Dry, I guess. I do like good puns.
But mostly, I like situational comedy; that is to say, the comedy that comes from the situation. Those early Bill Cosby albums that told a story, but there was seldom a joke to be found. The great thing about the Parking Garage episode of Seinfeld was the believable, though exaggerated, nature of the situation, getting lost in one of those concrete structures. There was an episode of the Dick van Dyke Show where Rob is convinced his and Laura’s son was switched at birth until the other couple shows up at the door.
I’m not much of an early Python fan, or Anglophile generally – those comedies on PBS on Saturday night usually leave me cold – yet The Meaning of Life, and especially Life of Brian I loved.
I adored the movie Airplane!, but the funniest movie I ever saw was Young Frankenstein. I can watch the last 20 minutes of Animal House, from the Belushi speech on, anytime.
Pearls Before Swine is probably the only newspaper strip I find funny. (There are others I enjoy, but not as humor.)

5. “I have a mind to join a club and beat you over the head with it.”
Who was the last person that you wanted to beat with something or other?

As a pacifist, I tend to avoid actual violence. But metaphorically, it was surely some politician or pundit who said something really stupid. But I don’t remember, because they come at such regular intervals, it’s difficult to keep track.

6. “I never forget a face, but in your case, I’ll be glad to make an exception.”
Would you ever like to change something about your face?

As noted before, the vitiligo has made me several shades lighter, but in a splotchy way. I’m not pleased, but I’m sort of getting used to it. Or not.

7. “I was married by a judge. I should have asked for a jury.”
I read an article recently that asked if marriage was still relevant. Other than raising children do you see the point?

Yes. I know it was 43 years ago, but when I think of Chief Justice Earl Warren in the Supreme Court case Loving v. Virginia proclaiming that “marriage is one of the ‘basic civil rights of man'”; I still believe it.

8. “If you’ve heard this story before, don’t stop me, because I’d like to hear it again.”
Do you find that you tend to repeat your stories?

Though for perhaps two years after I appeared on JEOPARDY!, some third party would mention that I was on, which forced me to tell the tale over and over. This is why, starting the very first month of blogging, I started writing about the event. The primary reason that I was bored with telling it. Though I will give a very abbreviated version if asked, usually in response to specific questions, “How much did you make?” or the like.

This reminds me of the Randy Newman song Potholes in which he wrote:
I brought the woman who was to become my second wife-God bless her
To meet my father for the first time
They exchanged pleasantries
I left the room for a moment
It was the first time he had met her you understand
When I came back
He was telling her the [embarrassing] story…
And the next time they met, he told it. AGAIN.

Yes, but I select well. Actually, I’ve known dishonest people, and sometimes you have no control over this, but sometimes you do. Of course, none of us is perfectly honest, but I’m talking in the main.

10. “Wives are people who feel they don’t dance enough.”
Have you ever felt that your significant other did not go out with enough?

The whole notion of the monthly date with the Wife (movie, or dinner, or something) is, I must say, my idea, based on trying not to fall into a rut and having the opportunity to communicate sans the Daughter. When it doesn’t happen, it’s usually because she thinks we’re too busy; I contend that we’re NEVER too busy for that. Now maybe we can’t find a sitter or someone’s sick, and that’s legit but too busy? Nah.