dividing the nation in a time of crisis

In the “You Just Don’t Do That” category: Robert Hendrickson, Rector, Saint Philip’s in the Hills Episcopal Church, had some thoughts about that photo op at St. John’s Episcopal Church in DC. This after “heavily armed federal troops had beaten with batons and fired smoke grenades and chemical irritants at a stunned crowd of peaceful protesters, to make way for the President.”

“This is an awful man, waving a book he hasn’t read, in front of a church he doesn’t attend, invoking laws he doesn’t understand, against fellow Americans he sees as enemies, wielding a military he dodged serving, to protect power he gained via accepting foreign interference, exploiting fear and anger he loves to stoke, after failing to address a pandemic he was warned about, and building it all on a bed of constant lies and childish insanity.”

From WaPo: “Inside the push to tear-gas protesters ahead of a Trump photo op- ‘Words of a dictator’: His threat to deploy military raises the spectre of fascism.

Oh, no, they used the F word! In mid-May 2020, David Moscrop said: “For now, we can say that [he’s] enough of a fascist to raise serious concerns warranting a significant and coordinated response from inside and outside of U.S.” Maybe he’s a right-wing populist. Perhaps the church event is his Reichstag fire moment. However he’s labeled- I like proto-fascist tendencies -it’s most unsettling.

A number of folks have recently unloaded on him lately. Former Defense Secretary James Mattis SLAMS him for dividing the nation in a time of crisis. Other generals followed suit.

Even former Presidents, notoriously resistant to criticizing whoever is in office, have bashed the guy. “We Are Better Than This”, said former President Carter. He called for a “Government as Good as Its People.” W and Obama have also made indirect comments.

Some of my liberal friends complain that criticism should have come sooner. But most of these folks are institutionally disinclined. Former military folks usually keep their mouths shut. Besides, I’d argue, it’s worse in year 4 than it was in year 1. In the beginning, there were people who apologized for him. “He’ll grow into the job.” And he has, just not in a manner in keeping with stated American values. His American Autocracy is now devoid of meaning.

I’m really sorry he was impeached because it’s NOW when he needs to be removed. And it won’t come via the 25th Amendment. The Cabinet consists of ne’er-do-wells such as Betsy DeVos (Education), hacks such as Alex Azar (HHS), and wusses such as Mark Esper (Defense). Plus there’s Attorney General William Barr, who makes me long for the days of Jefferson Beauregard Sessions III.

Malcolm Corden Teaches Donald Trump How To Hold the Bible.

Pissed Away feat. BHO Vs. DJT by Founders Sing

Several years ago, I came across a list of American Military Deaths in the Iraq war since May 1st, 2003. Though the list hasn’t been updated since early 2012, and the count since mid-2016, it’s still meaningful. This guy from North Carolina was killed by an improvised explosive device. That guy from Texas died from “wounds suffered when enemy forces attacked his unit with small-arms fire.”

There is something very powerful about seeing the specifics. These people who died aren’t just numbers. They are spouses, siblings, sons, and daughters. My opposition to that war, from before the beginning is well-documented in this blog.

Will the current regime participate in a global ceasefire or more lost wars? As the subtitle of the article reads: “Like his predecessors from Truman to Obama, Trump has been caught in the trap of America’s blind, deluded militarism.”

“Undercover of highly publicized redeployments of small numbers of troops from a few isolated bases in Syria and Iraq, Trump has actually expanded U.S. bases and deployed at least 14,000 more U.S. troops to the greater Middle East, even after the U.S. bombing and artillery campaigns that destroyed Mosul in Iraq and Raqqa in Syria ended in 2017. Under the U.S. agreement with the Taliban, Trump has finally agreed to withdraw 4,400 troops from Afghanistan by July, still leaving at least 8,600 behind to conduct airstrikes, ‘kill or capture’ raids and an even more isolated and beleaguered military occupation.

“Now a compelling call by U.N. Secretary-General Antonio Guterres for a global ceasefire during the Covid-19 pandemic has given Trump a chance to gracefully deescalate his unwinnable wars – if indeed he really wants to.” I assume it’s harder to fight a war when your hands are slippery from hand soap.

There was a recent 60 Minutes report about the military during the pandemic. Exercises were canceled. Extra precautions were taken not to infect servicepeople. Fighting an “unseen enemy” has put the brakes on many activities. Perhaps it is a sign of what we should do going forward.

“Kelly’s performance… should be a wakeup call to anyone who still thinks there are ‘adults in the room’ who’ll save us.”

In this whole Niger/condolence controversy, people are correct to point out that almost no one, certainly those in Congress who should have been in the loop, knew that the United States even had troops in the western African country.

The intelligence was so insubstantial that four US service members were killed, and that needs to be thoroughly invested. The body of one Green Beret, that of Sgt. La David Johnson, was not recovered until two days later, and that hasn’t been explained either.

I suspect General John Kelly, the White House chief of staff, advised the Donald not to make calls because he knew that wasn’t in his skill set. Kelly tells Trump the touching, inspirational words of his friend who said, “(your son) knew what he signed up for and he was surrounded by the best men in the world, doing what he loved.” The message goes in, comes out sideways.

Responding to media criticism, he calls the sergeant’s widow, Myeisha Johnson, quoting General Kelly’s words without any real feeling or personal experience and bollocks it up. At Mrs. Johnson’s request, her friend, Congresswoman Frederica Wilson, was listening in, and later noted the insensitive response.

NOW he lashes back, and not with just with his Twitter war, when he refers to Rep. Wilson as “wacky” at least thrice, presumably because she always wears hats in honor of her grandmother. He claims to have proof that the member of Congress, and presumably Myeisha Johnson, are lying. Or as Borowitz satirically put it: Trump Says He Is Only President in History with Courage to Stand Up to War Widows.

Compare this response to that of George W. Bush, who accepted a grieving mother’s anger.

While condolences are being rush shipped out, he deploys John Kelly to the briefing room. As the New Yorker notes:

“The press briefing could serve as a preview of what a military coup in this country would look like, for it was in the logic of such a coup that Kelly advanced his four arguments.
1. Those who criticize the President don’t know what they’re talking about because they haven’t served in the military…
2. The President did the right thing because he did exactly what his general told him to do…
3. Communication between the President and a military widow is no one’s business but theirs…
4. Citizens are ranked based on their proximity to dying for their country…

“When Kelly replaced the ineffectual Reince Priebus as the chief of staff, a sigh of relief emerged: at least the general would impose some discipline on the Administration. Now we have a sense of what military discipline in the White House sounds like.”

The Weekly Sift quotes other critics of the general. “Vox’ Dara Lind compares his attitude to Jack Nicholson’s character in A Few Good Men… ‘He actively thinks that they have America wrong, and that they will never understand it in the way those who serve it will.

“Charles Pierce sees Kelly’s lying defense of Trump as ‘a terribly sad moment. Everything and everybody this president’ touches goes bad from the inside out.

“Matt Yglesias had another depressing thought. ‘Kelly’s performance… should be a wakeup call to anyone who still thinks there are ‘adults in the room’ who’ll save us.” We’re down to Mattis, I suppose.

Equally chilling is WH spokesperson Sarah Huckabee Sanders who suggests that one ought not to challenge the word of a four-star general, even when he’s wrong. It’s part of the increasingly authoritarian response to criticism.

And THAT is what I think is another takeaway from this debacle.
***
THE DAILY SHOW WITH TREVOR NOAH, OCTOBER 23, 2017 – John Kelly lies about a congresswoman while defending President Trump; Gold Star father Khizr Khan 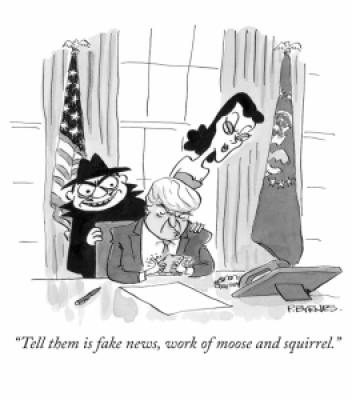 This Article Won’t Change Your Mind – “The facts on why facts alone can’t fight false beliefs.”

To End Hate, We Gotta Walk the Talk – Aristotle on Why Professing Liberal Values is Nowhere Near Enough

Door-Busting Drug Raids Leave a Trail of Blood and When a no-knock drug raid ends in death, is it capital murder or self-defense? Two cases in Texas took different paths

This Is How Your Hyperpartisan Political News Gets Made

Amazing Disgrace: How did a thrice-married, Biblically illiterate sexual predator—hijack the religious right?

When He Is Ignorant of His Own Ignorance

“PrOtEsT” – Poet Activists Throughout the Years

How the Choctaws Saved the Irish

War On The Moon

In the Congressional Fight Over Slavery, Decorum Went Out the Door

Scott Pelley is pulling no punches on the nightly news

For 15 Years, New Orleans Was Divided Into Three Separate Cities

Sweden is tackling its throwaway culture

The True Story of the Backward Index

Ask A Cartoonist: Women Who Inspire

Rules for the Black Birdwatcher – With Drew Lanham and Extreme Birdwatching

The 21 most spectacular theaters in the U.S.

How Jaquandor made Gluten-Free Fried Chicken

Now I Know: The Haircut that Went to War (Maybe) and What They Did Not See and Why People Originally Didn’t “Like” Cigarettes and The Invisible Wall Around Most of Manhattan and The Masterpiece Hidden in Plain Sight

Godsmack Play A Cover Of ‘Come Together’

Understanding Deal Breakers: The Psychology of Music and Romance

How America’s Sporting Events Have Turned into Mass Religious Events to Bless Wars and Militarism. Amen.

The Weekly Sift analyzes what the Atlantic article “What ISIS Really Wants” gets right and gets wrong. Also, ISIS Bans Teaching Evolution In Schools in Mosul, as well as art, music, history, literature and, of course, Christianity.

American ISIS: The Domestic Terrorist Fallout of the Iraq War.

Something most Americans no little or nothing about: The Trans-Pacific Partnership is the latest trade deal being cooked up in secret by big corporations and their lobbyists.
END_OF_DOCUMENT_TOKEN_TO_BE_REPLACED