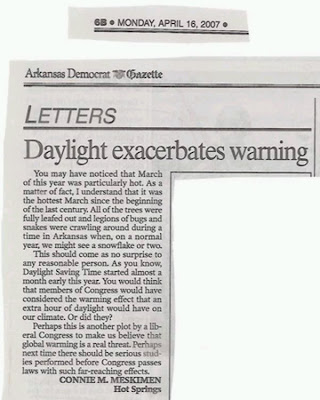 Hope you can read the item above about the cause of global warming.
***
I was sad to read that writer David Halberstam had died. Probably the only book of his I ever read in toto was 1972’s The Best and the Brightest, but it so informed me about VietNam that it was pivotal in my understanding of “wisdom” run amok. I’ve read large sections of The Powers That Be (1979), one thick book. But I have read, and enjoyed the essays on sports, which may have been excerpted from his many sports books, such as The Breaks of the Game, The Amateurs, and especially Summer of ’49, about the Red Sox-Yankee rivalry. Halberstam died in a car accident on the way to see Yelberton Abraham Tittle, the former New York Giants’ quarterback, for a book about “The Game”; a decade before the Super Bowl, the 1958 Colts-Giants Championship Game helped to “make” the NFL.
***
Most of the pieces about Boris Yeltsin were about his mixed legacy: “Russians pay respects to flawed hero Yeltsin”: Tributes to Yeltsin praised him for taking on and defeating the Soviet establishment, but also noted his shortcomings during his eight years as president – economic turmoil, a disastrous war against rebels in Chechnya and his drink-fuelled gaffes.” Somehow reminded me of an American President, Richard Nixon.
***
I was interested in personal international reactions to the Virginia Tech shootings. Here’s one from an expatriate in New Zealand, and, at my request, one from Great Britain/ Someone domestic noted, in response to a comment I made: “People see an Iraq bombing and think, ‘Gee that’s sad, but not unexpected.’ People expect bombing and mayhem in a war zone” but not on a peaceful college campus. OK, sure. But those lives lost are no less horrific to me because they’re “expected”. (And I suspect those families in Iraq are just as horrified by the loss of their loved ones, and don’t think it’s “sad, but expected.”)
***
I first heard about the Ken Burns’ exclusion of Hispanics in his upcoming WWII documentary from history professor GayProf. Since then, the situation has been rectified, with Burns’ support. While hailed as a victory in some circles, I’ve also read a lot of that “affirmative action/political correctness run amok” rhetoric. I was most struck by this particular passage in GP’s piece: “This time, Burns set out to chart the little-discussed Second World War. How often have I said, ‘If only somebody would stop and think about that forgotten war!'” In setting himself to be the end-all and be-all on this oft-mined area, I think Burns had a greater responsibly to paint the broadest tableau possible. Off topic: GP, what do you think about this article Commentary: The hypocrisy of repeating the ‘w-word’?
***
Here’s an editorial about Kitty Carlisle Hart, more than a panelist on a game show, but New York State’s grand doyenne of theatre.
***
And yet I have nothing pithy to say about the passing of music legend Don Ho?