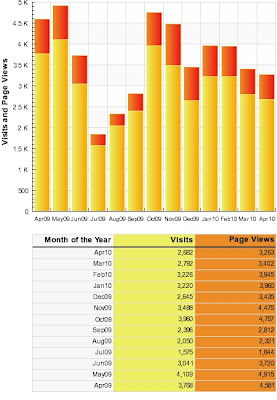 But the other reason I’m surprised I made it is that last summer, I got REALLY discouraged.

I’m not one of those people who care about having hundreds of hits a day. When my monthly numbers dropped from 4109 in May 2009 to 3041 in June, it didn’t bother me over much. But when it sank to 1575 in July, THAT was really bothersome. What did I do wrong? I started posting notices of my blog posts on Twitter and Facebook, which actually did help a little, but I am not great at doing that regularly.

BTW, #2: two people asked me why I have two Facebook accounts within 30 minutes when I went to the comic book show in Albany last Sunday. It’s easy: I started one, using my work e-mail, then I couldn’t find it. so I started ANOTHER one with my home e-mail. Now I know what both of them are. If I had the time, I’d just cancel one, but since there are people on one who aren’t on the other…well, it’d be work. Someday. When I retire, maybe, or take a long vacation where I actually just play on the computer. That is to say, not any time soon.

Then I noticed something: this blog, which had been on the first page of Google, disappeared from Google. It didn’t just fall off the first page; it seems to have vanished altogether.

Now, I can be found on a Google search. My Twitter and my blog on the Times Union can be found in the top 10. One of my Facebook pages and even my seldom-used Library 2.0 account – check out the vintage of the picture – are in the top 30. Even comments, articles I’ve written for other blogs, and specific pieces from the TU blog show up. But not this one.

This has pretty much forced a momentous decision.