Once upon a time, as I’m sure I’ve told you, I thought that, if I kept learning, I would eventually know everything I wanted to know. I read the local newspaper and watched the local and national news, first Huntley/Brinkley on NBC, then Cronkite on CBS.

Mostly, I read reference books. A lot. The Encyclopedia Americana, which my parents bought and probably couldn’t afford, I devoured over maybe three years. There was also an annual, updating the information.

Also, from about when I was nine, and for more than a half-century, I would receive the World Almanac for Christmas, and I would read it. Early on, it was cover to cover, but even after I’d largely mastered the tallest mountains, longest rivers, and whatnot, I would read the Year In Review material of the most important stories. It was largely November to October, actually, for its publishing deadline, but it would always capture the Presidential and Congressional elections.

Of course, information exploded. Three TV networks became 373. They keep discovering more moons in the solar system, and more elements for the Periodic Table. Of course, the Internet. The World Almanac used to have a list of Celebrities and I knew who most of them were. If there’s such a list now, I have no idea how they would limit it.

All of this to say that, until a couple of months ago, I had no idea who Joe Rogan was. My daughter tells me that she has been listening to lots of podcasts to understand different points of view. This is like when I would read William F. Buckley or watch George Will on TV. So SHE knew who Joe Rogan was and, in fact, says she recommended him to me – this is possible. But she says I said, and this sounds accurate, that I didn’t have time for more podcasts.

NOW I know who he is. Recently, my daughter asked me if I knew who Joni Mitchell is. Oh dear, I have failed this child. I told her that I’d seen her twice in person and bought four of her CDs in 2021. Obviously, she brought her up over Neil Young (who she also doesn’t know) wanting to be removed from Spotify because of the info about vaccines on Rogan’s platform, and Joni following suit.

One of the interesting things I learned about Amy Schneider, 40-time JEOPARDY champion, is that she has a younger partner, which is how she knows more current popular culture references.

I’m fascinated how she missed her last Final. COUNTRIES OF THE WORLD: The only nation in the world whose name in English ends in an H, it’s also one of the 10 most populous. One of my friends deduced, “I thought about what might precede ‘h’ and could only think of ‘s’. From there, my brain ambled over to Asia and found Bangladesh.”

I have to conclude that Amy did NOT read the World Almanac every year. But she learned a LOT of other info, mostly of recent vintage, that my brain just doesn’t absorb.

I’d test myself to see if I could remember which Presidents of the United States had been Secretary of State.

From the time I was about ten years old, I would get for Christmas a World Almanac almost every year. And I was happy.

When I was growing up, it was my parents making the purchase. As an adult, it would be a significant other, or else I would gift it to myself.

The almanac contained tons of statistics. Some of them were rather static: the highest mountains, the longest rivers. But other info was ever-changing, such as the largest cities, and the list of countries of the world – with a section of color maps!

There was a section on sports, with the most recent seasons in college basketball and football, the Olympics, and several professional sports.

I’d test myself to see if I could remember which Presidents of the United States had been Secretary of State, or what languages were most popular in the world. I’d check on the birthdays of celebrities or calculate the day of the week of some historic event.

In 1998, I started reading the World Almanac voraciously in anticipation of testing to get on the quiz show JEOPARDY! In truth, I don’t know that it helped glean new information, but it was nice to confirm things I already know.

My favorite editions are in the years following a Presidential election when it breaks down the voting in great detail.

The best feature in the almanac is that it cites the sources of the data it provides, so if I needed more information, I know where to look.

But I will get the 2017 World Almanac, even if I have to buy it myself. After all, 2016 IS a Presidential election year.

Favorite purchase EVER made, by me? As opposed to things purchased for me, which would an entirely different matter. Oh, dear, my library geekdom mind is showing; well, at least it has a pop culture bent.

All right, I have to pick something that has given me hours and hours of enjoyment. I first thought of the World Almanac, but I did not purchase my first half dozen almanacs, my parents did, for Christmas. 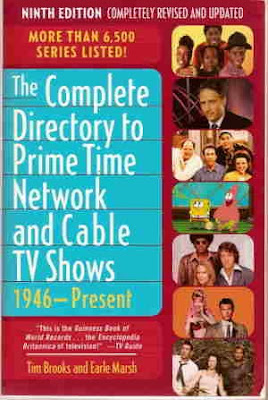 Certainly, a contender was going to be the first time I ever purchased The Complete Directory to Prime Time Network TV Shows by Tim Brooks and Earle Marsh, which allowed me to relive shows I remember, get details on shows I had forgotten, and provide useful, if trivial, information when television facts are at issue. Based on a recent blog post, I discovered that, in the Albany market in 1967, the Monkees were pre-empted by the syndicated Death Valley Days, and that I Dream of Jeannie was bumped by a local quiz show. I love that trivia stuff.

But I suppose, honestly, the correct answer to this question is the first time I got Top Pop Albums, which probably covered 1955 to 1995. I’m guessing because I’ve purchased subsequent additions. This book has all the albums of all the group who had a Top 200 hit according to the Billboard charts, with brief bios of the artists, and a list of all the album cuts, so one could find on which albums that particular song appeared. It allows me, in a visceral way, to re-experience artists I love or learn new things. I refer to it several times a week.

In fact, the newest iteration of this book, which goes up to 2009, has become so large that the album cuts now appear on a separate CD; necessary, given the number of records delineated, but I believe that the previous version, which went up to 2005, will probably be the one that I will find most useful on a day-to-day basis.

What about “real” books, books with actual sentences?

About a month before Carol and I got married, some of our friends threw us a party. We were supposed to answer a series of questions about each other. I was supposed to pick her favorite book; don’t know what I chose, but it was wrong. It was 100 Years of Solitude, which I had never heard her ever mention.

She guessed the World Almanac. Some folks declared skepticism about her pick, but it was dead-on right. It’s a book I’ve gotten every year except maybe a couple since I was 10.
Now that the computer is so ubiquitous, can’t I find the same info online? Probably most of it. But I know where to find it in this book, with a notation for the source of additional data; in some ways, THAT is more significant than the initial information. Besides, sometimes I don’t WANT to be on the computer.

Indeed I love my reference books on music, TV, movies; that’s why the former is on my list for The Giveaway (see right column until July 3, 2010).

But what about “real” books, books with actual sentences? Certainly, one of the most significant is Lying by Sissela Bok; except for a couple books on the Beatles, it’s one of the books I’ve read more than once all the way through as an adult.

Another would be the Bible, but that’s a special case. Sometimes it’s just too oblique for me. In our Bible study, one of the goals is to ascertain what the reading means for today. But there are plenty of readings, in Leviticus, e.g., that I can’t fathom., even after repeated study.

So I pick the book with the facts and figures as my favorite.