Raoul Vezina was born in January 1948, I believe, in Troy, NY. As far as I can tell, he was always been a very generous and very talented soul.

Here’s a picture that he drew back when he was in high school, which he gave to his friend, Jim Strickland dated 12/13/65.

He was also a musician, playing keyboards and harmonica; these are photos of RV from 69/70 around Lemoyne College, also provided by Jim.

Eventually, he found his way to New Paltz, NY, a small college town about halfway between Albany and New York City. Michael T. Gilbert recalled that he played some kind of “electronic piano gizmo with a band that gigged at St. Blaise bar/restaurant” in town.

Michael and Raoul often collaborated on stories. Here are a couple of nice pieces that appeared in 1973 in the first issue of Michael’s New Paltz Comix underground. 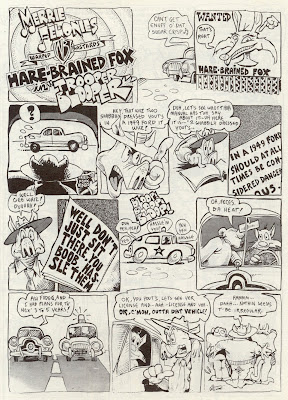 Michael noted that he and Raoul “either met at the local drugstore (fighting over the latest comics!) or at the school newspaper office, where we both contributed cartoons. We hit it off and decided to collaborate on a page for the first issue of New Paltz Comix, which was originally to be published by the school paper. When they dropped the ball, I took over and printed it myself. I later published three more issues, and Raoul and I collaborated on a neat sci-fi story, “Rubber Soul”, for the second issue. Raoul’s work appeared in all four issues, and he was my favorite contributor to those comics.” 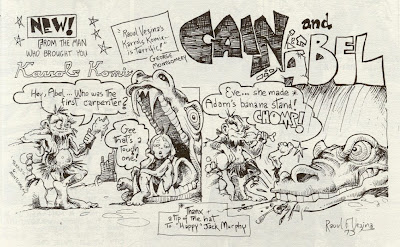 I first met Raoul in 1973 or 1974. When I first started collecting comics a couple of years earlier, my friend Mark and I used to have to hop into his car and drive five miles to a newsstand trying to find a copy of our letter four-color fix that wasn’t totally wrinkled from being jammed into the spinner rack. Then a guy named Peter Maresca opened a comic book store right in downtown New Paltz called the Crystal Cave. Oddly, Peter wasn’t all that interested in comic books. He was much more interested in comic strips and would diligently clip strips from the Sunday paper and put in protective coverings. This is, by the way, the same Peter Maresca who’s involved in publishing Little Nemo in Slumberland and other comic strip books.

So it fell to the guy running the front of the store, Raoul Vezina, to create an atmosphere of welcoming and information about the comic book scene. And he did. As a customer, I always felt welcomed and understood at the Crystal Cave, and that was largely Raoul’s doing.

And when I left New Paltz for the Capital District, I would find myself again in the Raoul’s orbit.