The Westboro Baptist Church is a fundamentalist Christian church that contends that God kills soldiers in Iraq and Afghanistan as punishment for America’s tolerance of homosexuality and for the presence of gays in the U.S. military. When Fred Phelps and his band came to Albany, NY a couple years ago, protesting across from the high school, for reasons that were unclear to me, I gladly joined the counterdemonstration. “Despicable” is possibly the kindest word I could use for him.

“Albert Snyder’s son, Lance Corporal Matthew Snyder, was a U.S. Marine who was killed on March 3, 2006, during active service in Iraq. His body was returned to the United States, and his family held a funeral for him on March 10, 2006, in Westminster, Maryland. 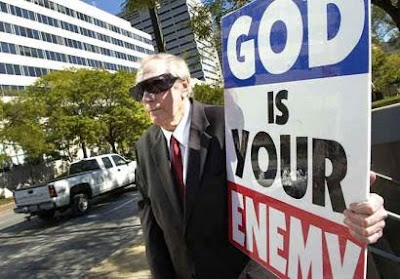 Synder sued Phelps and his church in 2006, and won in 2007, but, on September 24, 2008, “The Fourth Circuit issued an opinion reversing the judgment of the district court and vacating the jury award. The appellate court found the Phelps’ speech (both website and picketing) protected by the First Amendment.”

Now the case is in the US Supreme Court. The question is: Does the First Amendment protect protesters at a funeral from liability for intentionally inflicting emotional distress on the family of the deceased?

Frankly, my answer is that the Court may decide this case on very narrow grounds, ducking the greater issue. Making the case for emotional distress – which no doubt Mr. Snyder experienced – did not happen because he saw the protest at the funeral. Phelps was required to stay a distance away, and he complied. The funeral route was altered to avoid the Westboro folks. Mr. Snyder saw the reports of the protest on television only after the fact.

Perhaps it’ll be 4-4 on the broad issue, and that the deciding vote, ruling on the narrow specifics of this case, will end up being a Phelps victory. I’m a big First Amendment fan, but I won’t be celebrating, though I’m afraid it may be the right thing Constitutionally. In fact, this TIME magazine article makes me think it’ll be more like 8-1 or 7-2 in favor of Phelps.