She apologized but said she had started seeing someone else, so she had to break up with me.

Here’s a new thing I’m doing on this blog: a periodic recollection of my freshman year, into the beginning of my sophomore year, of college. These were significant events that had medium-to-long-term consequences in my life. If I had the discipline, it’d be an essay or one way-too-long blogpost.

I won’t be writing them even every month, but in September of this year, then in February, May, June, August, and October of next year; maybe a couple of other times. I’ll probably link back to the previous episodes, but I’m not going to write the whole thing then chop it up. But the background from the previous segments should inform the subsequent pieces if I do it write, or right.

I went to college where I did because my girlfriend was already there. But that didn’t exactly work out as I planned. 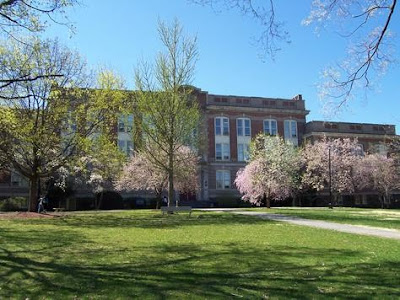 In the fall of 1970, I was in the second half of my senior year at Binghamton (NY) Central High School, and I would be graduating in January 1971. Meanwhile, my girlfriend, who was six months older than I, was a freshman at the State University of New York at New Paltz, about 150 miles away, in a small town along the Hudson River about halfway between New York City and Albany.

I would visit her at the all-female Bliss Hall when I could, which was difficult because there was no direct bus there. There was no train, and I would have had to take two buses, through New York City or through Albany, to get there by that mode.

I visited her once or twice in the fall and saw her at Christmastime, and perhaps once in the winter.

One weekend in May, I must have had a rare Saturday off, so I decided to surprise the girlfriend by hitching out to New Paltz. I got to Bliss Hall, and her hall neighbors said that she wasn’t there. But I had met them a couple of times and they seemed a little weird.

Finally, the girlfriend shows up. She apologized but said she had started seeing someone else, so she had to break up with me. Needless to say, I was devastated, and left. I contacted my friend Steve, who was across the river in Poughkeepsie, hitched over there (or maybe she gave me a ride; I’m not sure), and he commiserated with me. I specifically remember him going on and on about this great singer/guitarist named Bonnie Raitt, who I had never heard of, but who he had seen perform in the area; her debut album would come out later that year.

Then I hitched home.

Did I mention that New Paltz, where I had been accepted, was the ONLY college I applied to? So I’ll be going away to this particular college in the fall for, as it turned out, no particular reason.