I suggested that we try to put up a Wikipedia page for Raoul Vezina. 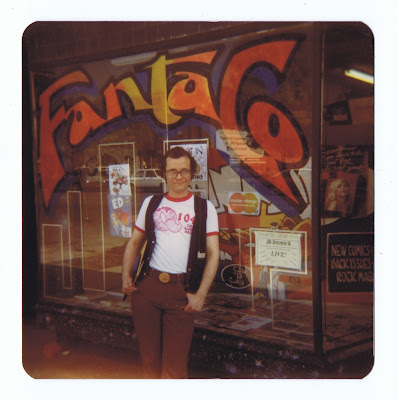 Here’s the weird thing about the death of Raoul Vezina, the comic book artist/musician/front man at the Albany comic book store FantaCo 30 years ago today; I STILL remember the day I found out, which was the day after he died, as well as I remember my daughter’s birth or my father’s death or the day JFK was killed. As it turns out Marc Arsenault has collected what I wrote five years ago. So let me tell you about a more recent event.

At FantaCon 2013, on September 14 and 15, there was a panel to talk about Raoul, held on each day, which I moderated.

One participant was Raoul’s younger sister Maria Vezina, a nurse and professor in New York City, who talked about the natural talent he had as both an artist and a musician. Apparently Freddie Freihoffer’s direction got him drawing right on the TV screen. She doesn’t think she has ever known such a generous spirit.

Don Rittner, historian, environmentalist, and all-around bon vivant, was in several bands with Raoul growing up. They lost contact for a time, but when Don wandered into FantaCo and saw Raoul behind the counter, they began a collaboration on a series of cartoons called Naturalist At Large [VIEW], written by Don, drawn by Raoul, which appeared in the now-defunct (Albany) Knickerbocker News. Don was awed by the fact that he had ideas of what he wanted to convey, but he could not draw a lick. Raoul invariably captured the ideas Don was unable to fully verbalize. These strips apparently made their way to Washington, upsetting more than a few federal legislators.

Michael T. Gilbert met Raoul at college in New Paltz. He talked about trying to get a college comic book off the ground, which was promised then reneged upon. Finally, Michael put out New Paltz Comix out himself, featuring the art of Raoul. Michael wrote a beautiful tribute about Raoul that appeared in the Comics Buyers Guide in December 1983, and was reprinted in the FantaCon 2013 program.

Fred Hembeck, the Weird Al Yankovic of comic art, had backup stories in two of Raoul’s Smilin’ Ed books recalled working on a story with Raoul and appreciated his easy-going manner.

Joe Fludd, who was on the panel only the second day, was a FantaCo customer, but also a budding artist who Raoul encouraged. Joe told the story from his POV how the obit I had posted on the poster board – because I couldn’t say aloud that Raoul had died – was perceived as a sick joke on someone’s part.

The audience for me in this presentation were Maria’s two sons, both born after Raoul died. Maria wanted for them to understand their uncle better, and they said we succeeded.

There will be a Kickstarter next year to get some of Raoul’s Smilin’ Ed stuff in print, including material that appeared in the CBG and the Metroland weekly arts newspaper.

Subsequent to FantaCon, I suggested that we try to put up a Wikipedia page for Raoul. Having never done so, I’m looking for any citations to his artwork, including his T-shirt designs; his musical gigs; or his work at either FantaCo or the Crystal Cave comic book store in New Paltz. Also looking for someone who understands the formatting. Please feel free to contact me at RogerOGreen (at) gmail (dot) com.

As some of you know, I worked at FantaCo, the comic book and film book store/publisher, et al in Albany, NY from May 1980 to November 1988, the second-longest job I ever had. (The current one is #1.)

There will be a FantaCon in September 2013, the first one since 1990. I’ll be there, Allah/Yahweh willing.

You’ll note that Tom Skulan, the creator of FantaCo and FantaCon, has dedicated the show to the memory of three individuals. I KNEW THEM ALL.

Phil Seuling was one of those people that the term “bigger than life” was designed for. He essentially invented the direct sales market for comic books, and his Seagate Distributors was not only FantaCo’s primary supplier in the early years, but the fact that he took a chance on FantaCo’s largely untested product line helped permit FantaCo to become a successful publisher. He threw some of the most lavish parties I’ve ever been to, in Brooklyn, NY.

Not only did Raoul Vezina work the front counter at FantaCo, he also designed the FantaCo logo, Smilin’ Ed. He drew the duck character that graces this blog. One of my favorite memories ever was co-plotting a Smilin’ Ed story with him for the X-Men Chronicles. He also was friends with more folk than anyone I knew, and would often get us into the J.B. Scott’s nightclub for free when some band he knew was playing.

Chas Balun was this gentle giant of a man. Had a great sense of humor, which showed up in his horror film writings. He lived on the West Coast of the US, so I didn’t meet him that often. Since I shipped most of the FantaCo publications, I got to speak with him on the phone regularly. My buddy Stephen R. Bissette was speaking fondly of him on his Facebook page earlier this month.

Speaking of Steve, I’m looking forward to seeing him in person, at the only show he’s doing outside his native Vermont in 2013. He’s the artist probably best known for his collaboration on Swamp Thing, though he’s done a lot of other great stuff. Haven’t seen him in person since 1988.

Also haven’t seen Michael T. Gilbert in a very long time, probably since before Raoul died, in 1983. On the other hand, Fred Hembeck, who Tom and Fred have confirmed is coming, though he’s not noted on the site yet, I got to see on November 11 of this year.

I have two tasks in re: this, and some of you may be able to help me. I’m interviewing Tom Skulan, sending him a bunch of questions by the end of the year, which he has agreed to answer. If YOU have questions you want me to ask, please let me know. I’m also working on a FantaCo bibliography for 1978-1988; if you happen to have any of those items that I could borrow – and that would include FantaCon programs, FantaCo catalogs, and Splatter Movies T-shirts, I would appreciate that. Contact me at the e-mail on this blog.