The pace quickened when ABC and CBS went to full color for its 1966 fall schedule. 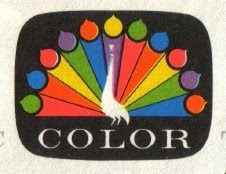 Looking for something else, I discovered that TODAY is the 60th anniversary of the first U.S. color telecast. “On June 25, 1951, with 12 million TV sets in existence, of which only two dozen could receive CBS color, CBS made history by presenting an hour-long color TV program hosted by Ed Sullivan and Arthur Godfrey with 16 stars that performed song, dance and comedy routines.”

As this article notes, “Earlier attempts to create marketable color broadcasts had been hampered by the FCC’s insistence that any color signal be readable by existing black and white sets as well. Even though the CBS color transmission system was not compatible with most existing televisions, the FCC approved it as the U.S. standard in 1950…

“Unfortunately, the color television sets that were required to view the programs did not sell very well. In 1953, the FCC reversed their decision to use CBS’s design as the national standard in favor of an RCA design that was compatible with existing TV sets.”

Like most software/hardware problems of today, there weren’t more color TVs sold in part because there wasn’t enough color programming and vice versa. But when NBC took the lead in color broadcasting, due in no small part to its relationship with RCA, which could build color TVs, color became inevitable, slowly at first.

The pace quickened when ABC and CBS went to full color for its 1966 fall schedule. I remember well the teases:

ABC in color,
The Avengers,
Voyage to the Bottom of the Sea,

Of course, early on, I saw those “color” logos in black and white.

“Laws are like sausages, it is better not to see them being made.” – apparently misattributed to Otto von Bismarck. But every once in a while, you fry some sausage in the pan and it tastes great.

I was home watching YNN, the Time Warner cable news station, during an extended session of Capital Tonight Friday evening, when Steve Saland, a Republican state senator from the Mid-Hudson, started speaking about an amendment to the marriage equality bill. There’s an overlay on the screen indicating that Saland had not yet indicated which way he would vote on the bill.

But minutes later, it was obvious that he would be the 32nd vote necessary for the passage of the legislation. It was, among other things, a great television moment.

And after he spoke, I set the DVR and went to bed, satisfied that there would be a rainbow over New York; the state legislature would pass marriage equality, and the governor would sure sign it.

Then I woke up very early in the morning, and it was so. Yay.
***
Arthur’s observation.