I’m not going to get into where I was ten years ago today, mostly because I did that at some point. Rather, I just wanted to muse about stuff. 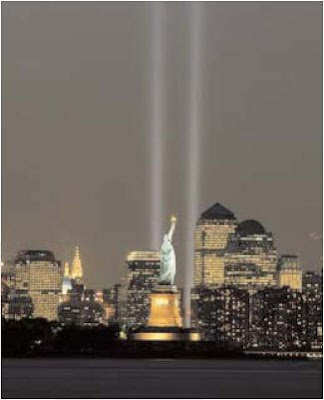 I’ve still not heard a credible explanation of why WTC 7 fell. One does not need to be a conspiracy theorist to wonder about some things that happened that day.

I remember that playing the “real American” card started very early on after the attacks. There were some guys collecting money for the victims’ families that very week. Well, I didn’t know what organization they were representing. But one guy’s demeanor, in particular, gave me pause. He suggested that not contributing to the cause was tantamount to treason. Maybe those who failed to contribute were unAmerican, even terrorists.

The American Red Cross had initiated blood drives in order to treat the many survivors of the multiple attacks in 2001. Of course, there weren’t that many survivors, but they moved forward anyway. I was scheduled to donate the week following, but they called me to NOT donate. They knew they had a bunch of one-off donors, and they figured I’d come back, but that these folks likely would not. I recall there was some criticism of the organization at the time, especially directed at the director at the time, the late Bernadine Healy. From the Red Cross section on Myths and Legends:
After 9/11, the Red Cross collected so much blood that it had to throw much of it out.
Blood is a perishable commodity, with a shelf life of about 42 days. Typically, between 1 percent and 3 percent of units collected reach their expiration date before they are used. That rate was only slightly higher (5 percent) for blood units collected from people anxious to help after 9/11, including more than a quarter-million people who gave blood for the first time.
In the uncertain days following the terrorist attacks, having a robust supply of blood available seemed prudent. It takes two to three days for blood to be collected, tested, and processed, and only blood already on the shelf can be used in the immediate aftermath of an emergency.

Have I mentioned lately that, purely from an aesthetic point of view, that I really disliked the Twin Towers? Someone said it looked like the boxes the Chrysler Building and the Empire State Building were wrapped in. As a result, I had irrational guilt over their destruction.

I was surprised/confused/appalled to see how quickly the so-called USA PATRIOT Act was passed, less than two months after 9/11. One might have concluded that such extensive legislation was in the hopper even before 9/11.

As the article in Truthout, “What a Difference a Decade Makes”, points out, surveillance has swelled to the point that all of us are targeted: “Over the decade, the government’s powers of surveillance have expanded dramatically. They are directed not just at people suspected of wrongdoing, but at all of us. Our phone calls, our emails and website visits, our financial records, our travel itineraries and our digital images captured on powerful surveillance cameras are swelling the mountain of data that is being mined for suspicious patterns and associations.”

I crashed Albany Pro Musica to sing the Mozart Requiem on a very windy 11 September 2002; that was the only day ever that I wore a tuxedo to work. Exactly two weeks later, I began my weekly vigil, with a number of people who had been there weeks and months before, in my opposition to the war in Iraq. What the heck did Iraq have to do with 9/11? Took a bit of grief over that. And it would have been one thing if it were only “regular people” who jumped all over France for failing to support the curiously illogical war in Iraq; it was US Congress that opted for the jingoistic ‘freedom fries’. How embarrassing.

Someone famously wrote that, after 9/11, irony was dead. Not so. One example is some conservative “humor” book with this goody:
Start a rumor:
Janet Napolitano’s Department of Homeland Security has decided to revise its color-code warning system.
If a small-scale terrorist attack—fewer than 100 expected dead—is imminent, Ms. Napolitano will describe the situation as “calm”—Color Code: Turquoise
If a larger-scale terrorist attack—in the league of 9/11—is imminent, Ms. Napolitano will describe the situation as “relaxed”—Color Code: Ecru.
If Al Qaeda is about to destroy New York and Los Angeles simultaneously with a selection of strategically positioned nuclear devices, like in 24 only way worse柚s. Napolitano will describe the situation as “vibrant”—Color Code: Taupe.
All of this is intended to show the Muslim world that the Obama administration will not “overreact” to terrorism the way the bad old Bush administration did.

Big yucks. Islamophobia is alive and well. But I think we’re better than that.

Despite it all, I think I need to try to follow the advice of the International Institute For Human Empowerment, a representative of which wrote:

The events of 9/11 crystallized for me, the belief that we must unite as peoples of the United States, and indeed of the world, against those who seek to destroy our freedoms. The beautiful diversity that we share was challenged, making us fearful, and causing us to begin to close our hearts to those whom we might have trusted.

We have a choice. We can be afraid of anyone different from ourselves, look out only for ourselves, and live so that only the fittest survive. We can allow terrorism to win by shutting ourselves down.

Or, we can decide in our hearts and minds that humanity is one family with many beautiful expressions of color, language, and customs. We can say that we will honor all those lost and those who mourn, by declaring that we will unite toward a True Democracy–where all are equal, and all are free!