My wife knew something about what I wrote in this post, so, initially, I thought I’d already posted it. Then I realized that she probably saw it in draft form, since almost never reads the actual blog. 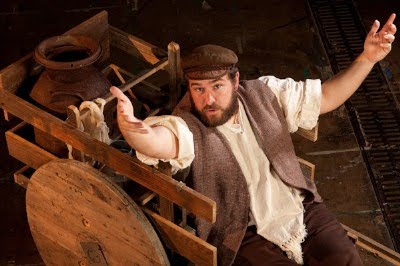 The first one from Jaquandor and SamuraiFrog puts me into the spirit of Fiddler on the Roof, specifically If I Were A Rich Man.

USING ONLY ONE WORD. Probably from Sarah Kim. My wife knew something about what I wrote in this post, so, initially, I thought I’d already posted it. Then I realized that she probably saw it in draft form since almost never reads the actual blog.
Where is your cell phone? pocket
Significant other? Carol
Your hair? lacking
Your mother? Trudy
Your father? deceased
Your favorite thing? music
Your dream last night? lacking
Your favorite drink? tea
What room are you in? office
Your hobby? daydreaming
Your fear? boredom
Where do you want to be in 6 years? retired
Where were you last night? sleeping
Something that you aren’t? tidy
Muffins? cranberry
Wish list item? time
Last thing you did? wrote
What are you wearing? apparel
TV? occasionally
Your pets? stuffed
Friends? helpful
Your life? eventful
Your mood? uneven
Missing someone? yes
Drinking? occasionally
Your car? bus
Something you’re not wearing? earring
Your favorite store? Amazon
Your favorite color? aquamarine
When is the last time you cried? recently
Where do you go over and over? church
Five people, who email me regularly? Denise, Darrin, Mary, Alexis, Leslie
My favorite place to eat? Friendly’s
Favorite place I’d like to be at right now? bed

There’s a semiannual comic book show I go to in Albany, and one of the primary reasons is to see Fred and his wife Lynn

I always mention the birthday of Fred Hembeck on this blog, not just because he’s my friend, but because he very specifically got me into blogging. When I discovered his blog in October 2004, not only did I read it, I went back and read everything on his site, going back to its inception on New Years Day 2003. Subsequently, I gave him an idea or two for his blog, then I decided, “Hey, maybe I should do my OWN blog.” Whether that’s worked out is for you to judge.

Moreover, he promoted my blog several times in the first several months. Not only that, he had a boatload of links to check out, so I did. I would comment on someone’s blog, that person would check out my blog, and directly or indirectly, most of my blogging buddies are a result of Fred’s roster.

Fred is still blogging regularly, though not daily, as he was in the beginning. He does have a separate section where he talks about films, Hey, Did I Tell You About That MOVIE I Saw Recently? which is my favorite current feature. He also shows some of his cards and his classic cover redos, some of which you could buy on eBay. Or you could commission Fred to do a drawing for you, as Mike Sterling did.

There’s a semiannual comic book show in Albany (actually Colonie) that I attend almost every time, and one of the primary reasons is to see Fred and his wife Lynn Moss. Our family used to visit them in the summer, but due to conflicts, we didn’t in the last couple of years (and won’t in 2011 either). Maybe next year.

Anyway, happy birthday, Fred. tell me how being 58 is; I’ll be there myself soon enough.

What obsolete skills do YOU have?

My daughter went bowling at a friend’s birthday party, and the machine at the lane kept score. I can keep score in bowling; I learned when I bowled in a league when I was 9. A spare (/) counts 10 plus the next ball, a strike (X) 10 plus the next two balls, which is why one likes to string marks (X and /) together. (A Dutch 200 is a game with alternating strikes and spares.) And sometimes the machine is wrong. It counts pins that are down and vice versa, but I can’t override it, and I hate that.

When I started my current job in 1992, one of my jobs was to operate the electronic bulletin board system. Though I had never heard of such a thing, I eventually became proficient at it, just as it became mostly defunct.

I can still figure out square root with pencil and paper; my calculator can do it in a second or two.

What skills do you have that, because of change in technology, have become obsolete?

The Rev. Roger Green was a priest of the Church of England.

Finding a Religious Common Ground. A reminder that the religions that sometimes divide us have much history in common. (CBS Sunday Morning)

From the Wikipedia:
One relatively minor aspect of the [Green Hornet] character that tends to be given limited exposure in the actual productions is his blood relationship to the Lone Ranger, another character created by [Fran] Striker. The Lone Ranger’s nephew was Dan Reid. In the Green Hornet radio shows, the Hornet’s father was likewise named Dan Reid, making Britt Reid the Lone Ranger’s great-nephew.

On November 11, 1947, radio show episode “Too Hot to Handle”, Britt tells his father that he, Britt, is the Green Hornet. After Dan’s initial shock and anger, Dan refers to a vigilante “pioneer ancestor” of theirs that Dan himself had ridden alongside within Texas. As he expressed pride in and love for his son, the Lone Ranger theme briefly played in the background.
The Lone Ranger property was sold to another company in the 1950s, which resulted in a legal complication that precluded The Lone Ranger from being directly associated with the Green Hornet.

And here’s a joint chronology of the Lone Ranger and the Green Hornet.

The Lone Ranger intro
Fred Foy, the announcer of the Lone Ranger, who died in December 2010, recreating the intro
the last 3/4s of the William Tell Overture by Rossini, the final section of which is the Lone Ranger theme

All The World Is Waiting or should be. Interesting history in five minutes, of the best known female character in comics, Wonder Woman.

Who could play the Marvel Comics character, the Black Panther?

Sean Smith resigned as L.A. bureau chief of Entertainment weekly to join the Peace Corps, which he wrote about in this Newsweek article. My favorite paragraph:
“Writing about Hollywood is like being a reporter at Disneyland. At first, you can’t believe that you get to spend every day in The Happiest Place on Earth. Everyone wants to ask you about your work. You’re surrounded by princesses, and the sky sparkles with pixie dust. But as the years go on, you learn about the oily machinery that manufactures all that enchantment. You see what Cinderella’s really like when that glass slipper comes off. And then one day you notice that the magic is gone, and all you’re left with is a small, small world.”

A Friend Like Charlie
Charlie Green is 14 (on Feb. 16) and his father, Roger Green, is 70. They are bound together more than just by blood. It’s music that also binds them.

Teaming up with CareerBuilder provides our national, regional, and local advertisers with access to job seekers in towns and cities where we’ve not traditionally been present,” said Roger Green, Managing Director, Newsquest Digital Media. “Plus it provides our audience with the greatest number of opportunities for jobs and careers.”

Roger Green made this Freedom of Information request to Devon County Council; definitely my kind of thing.

OK, a schmaltzy song from Lennon, sung by Starkey, but for over a year, I sang it to my daughter to get her to sleep.

JEOPARDY! answers. Questions at the end.

FAMOUS WOMEN $200: After taking up with John Lennon, she became known as “The Woman Who Broke Up the Beatles”
NONFICTION $400: Vincent Bugliosi took the title of this 1974 book about the Manson murders from a Beatles song
INVENTIONS $200: Name shared by a Beatles album title & an 1835 invention of Samuel Colt

The rules of engagement

103 Words of Love from Beatles for Sale (US), Beatles VI (US). My sisters, neighbor, and I used to lipsynch to this album and charge the neighbor kids a nickel each to watch. I was Lennon and sister Leslie was McCartney. Listened to this Buddy Holly cover a lot.
102 She’s a Woman from the B-side to I Feel Fine (UK), Beatles ’65 (US). A jaunty McCartney tune.
101 I Will from the white album. A lovely McCartney tune, but I always thought it needed to be longer than 1:42, as most of the covers (Ben Taylor, Alison Krauss) are.
100 Paperback Writer, A-side of single (UK), Hey Jude album (US). Not sure that I really liked this song all that much on the first listen, but it grew on me, especially the opening riff.
99 Yellow Submarine from Revolver.  This, b/w Eleanor Rigby, was possibly the first single I ever purchased. And then the album came out, and I was mystified that the response vocal in the last verse started one line later on the album than the single – no, I’m not crazy – confirmed finally on one of those Anthology singles. I like this McCartney song, performed by Starkey, though I’m not convinced that, tone-wise, it belongs on the album.
98 I Need You from Help! In the 1980s, my favorite local radio station had something called Fourplay, four songs related by a theme. I found four songs called “I Need You” – this Harrison song, an obscure Who tune, the ones by America, and I think, Joan Armatrading. Or maybe it was Paul Carrack. They went together surprisingly well.
97 Please Please Me from Please Please Me (UK), Introducing the Beatles/The Early Beatles. About a perfect early pop tune from Lennon.
96 Good Night from the white album. OK, a schmaltzy song, with sappy strings, from Lennon, sung by Starkey, but for over a year, I sang it to my daughter to get her to sleep.
95 Dear Prudence from the white album. Lennon’s song about Mia Farrow’s sister in India. I like that it’s of a specific time and place.
94 Being for the Benefit of Mr. Kite! from Sgt. Pepper’s Lonely Hearts Club Band. From circus posters Lennon saw. A fun, psychedelic cut.
***
JEOPARDY! questions:
Who was Yoko Ono? (But I don’t buy the charge.)
What was “Helter Skelter”?
What is Revolver?